Rev Up Your Style 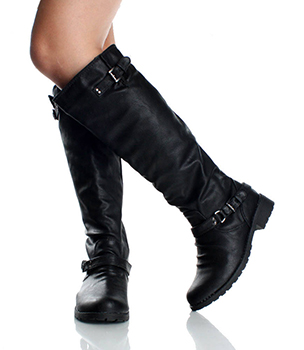 As warmer weather starts to bring us all out of our winter hibernation, we as human beings start thinking about all the outdoor activities we enjoy. If you live in the Milwaukee area like I do, which is also home to the Harley Davidson Motorcycle Company, you may also be longing to get out on the open road on your hog (Harley slang for their motorcycles). Even if you don’t own a motorcycle, you can’t deny the attraction that the fashion industry has had with the myth of the rebellious outlaw rider and all that it entails. Initially these coats were meant to provide protection for the rider, but their intimidating presence was soon adopted by various subcultures such as punks, Goths, and metal heads. The coats have also been associated with military aviation, and the police department. In the 1953 film “The Wild Ones,” which starred a young Marlon Brando as the leader of a motorcycle gang, the leather jacket and motorcycle cap was suddenly on the fashion radar for cool cats everywhere around the world. The look of the leather jacket, paired with a t-shirt and jeans, has endured and become a classic style that can be accessible to everyone in one way or another.

Fashion designers love to play with extreme contrasts - like hard and soft, as well as black and white, in their quest to keep reinventing how we think about style. I love the look of a leather motorcycle-inspired 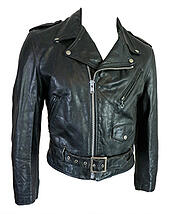 jacket worn over a more feminine dress. It’s the epitome of using a fashion trend to good advantage. A great jacket can transform the average into something extraordinary. So, while you’re out shopping at Goodwill, the first thing I’d try to scout out would be a jacket or vest that features moto-styling. This could be leather, cloth, or even a sweater that has the hallmark details like snaps, epaulets, studs, zippers and belts.

Like I always say, adapting a trend doesn’t mean a literal moto-makeover for your wardrobe. It could be as simple as looking for a cool graphic t-shirt in basic black with an awesome design. Paired with some distressed jeans or shorts, it’s a simple and easy nod to the greaser culture minus the grease!

Accessories abound in this sub-genre of fashion. Sometimes just a few simple accessories evoke the look you’re going for. Studded belts, collars and wrist cuffs could be the start of your fashion rebellion just as easily as a full-on black leather jacket.

The black leather motorcycle boot has many variations in style, but always brings with it the swagger and confidence that the moto-fashion look is all about. I’ve seen them paired with frilly frocks almost as much as I’ve seen them teamed with denim jeans. They’re actually considered a fashion staple for many people.

The motorcycle cap is a cool alternative to a baseball cap or other kinds of headwear you may already have. I bought a version of the one Mr. Brando wore in the aforementioned film and I don’t own a

motorcycle! I do like the look however. It’s a cross between a military cap with a visor and naval officer’s hat.  Tan with a black leather brim, it works with almost anything, and gives me a sense of style in a flash. You can also look for a Harley insignia baseball hat if that’s more your speed as well.

Are you “Born to be Wild” (as the song says)? You can always find new-to-you inspiration at Goodwill. It’s the easiest way to rev up your style at a price that won’t put the brakes on your fashion budget!  And, there’s nothing remotely “outlaw” about helping to support the Goodwill mission of job training for the less fortunate!