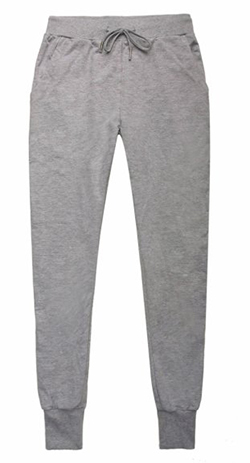 Fitness is all about the pursuit of strength, mobility, and a sense of well-being for a great many people. Whether you’re part of a walking club in your neighborhood, sweat it out at home to your old Jane Fonda VHS tape, or go to your local gym, everyone can realize the need for athletic wear and sportswear in a well-appointed wardrobe. So just when did workout wear morph and merge into the world of fashion?  I thought I’d take a look into some history about these casual garments and trace their progression from the gymnasium to the runway.  Is there such a thing as “fashion conscious” sweatpants?  In general, I would venture to say that the acceptance of gym clothing as casual street wear probably coincided with the changes in what were considered societal norms of day-to-day fashion.

According to my research, the basic gray sweatpant made from a heavy, knit fabric-like cotton or a polyester blend is one of the most popular pieces of clothing to wear worldwide. The very reasons that they worked so well for athletic training is exactly what made them popular on college campuses in the later 1960s and into the 1970s. Because of their baggy fit they allowed freedom of movement, flexibility, and most of all, comfort for the wearer. Whether you like it or not, now they’re available in lots of variations and styles that can seem quite appropriate for a variety of situations, with perhaps red carpet premiere’s excluded.

The whole family of sportswear that spawned from this humble gray pant is really amazing. Just think what kids and adults would do today without their knit hoodies, or warm up jackets! Let’s take a look at some of the variations in styles that have become a part of the athletic wear family, shall we? 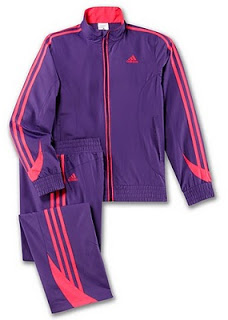 Wind pants and tops are usually made of nylon and are not used for warmth so much as to protect the wearer from cold wind and or rain. Later on in the 1980s these two-piece ensembles branched out into a million designs (usually gaudy) and graced young and old alike. They fell out of favor as time went on, but their neon memory is still kept alive through vintage boutiques and fashion stylists who incorporate them in unusual ways with more conventional pieces. I just recently saw a music video where the dancers wore the colorful zip up jackets with jeans and high top tennis shoes. I even said to myself that I liked how it looked! As they say “everything old is new again”.

Jogging suits, or tracksuits are a slimmer fitting cousin of the sweatpants, but a descendant nonetheless. While these were primarily used for runners at first, Adidas and other companies recognized their value as fashion during the rap music boom of the 1980s.The logos and colors added vibrancy and casual appeal to the performers. In the 1990s velvet versions of these two-piece ensembles became the go-to for college girls and moms everywhere! My only tip is to avoid anything that has a logo emblazoned on your rear end. That is where I draw the line here!

Nowadays the yoga market has added another wrinkle to this genre - the yoga pant. This is more than a legging, yet less than a pair of slacks. They are usually made from a heavy knit that has some spandex or stretch in it to accommodate the yoga positions. They have also been smartly marketed to the busy mom, as another alternative for her daily wardrobe. These, like leggings, should only be worn with longer sweaters or tunic tops that come to the mid-thigh.   Even if you aren’t that into fitness, I know that all of you have owned some form of this utilitarian garment at one time or another. I’m not judging here, but I am of the opinion that they should be kept in the gym and not in the street, mall, or campus. But that’s just me, and that’s the beauty of Goodwill and our stores! We have so many items that can suit so many people and their lifestyles at great prices. So take a jog on over to the Goodwill store in your neck of the woods and make a purchase of some athletic apparel today. It’s never too late to start a new fashion or fitness routine, and it’s definitely never a bad time to help those in need by supporting our mission.