My weekly column for Amazing Goodwill and my design blog, Design Coach, are about all things design, living a stylish life and entertaining (like setting a great table). I share DIY projects, decorating and design tips, as well as ideas and secrets.

If you have a specific question for Merri, feel free to email her at askmerri@goodwillsew.com. 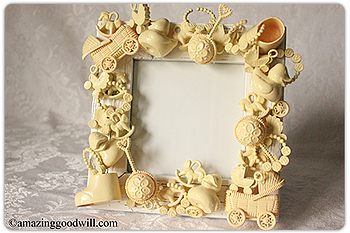 Is a baby shower on your calendar this summer? We know new parents take lots of pictures of their newborns. So why not make a special keepsake frame to show off the little one?

I made mine “gender-neutral” in butter cream, but if you know the sex of the baby, or the color of the nursery, make one to match. 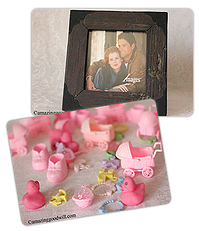 Look for a frame with a wide flat front. I found a brand-new one (original tag still on it - $14.99) for only $1.99. The giant bag of plastic baby shower party favors was another bargain for $1.99. I purchased it months ago, knowing I would find a use for it eventually.

I laid the items on the frame to get an idea of how many I would need. Since the rubber duckies were three dimensional, I cut off the side or tail, so they would lay flat on the frame.

You just can’t go wrong with spray paint. It’s so easy to use, covers evenly and is available in a many colors.

After the paint dries, attach the favors with a hot glue gun. Pile them on top of each other and try to cover as much of the frame as possible. And you have an original work of art!