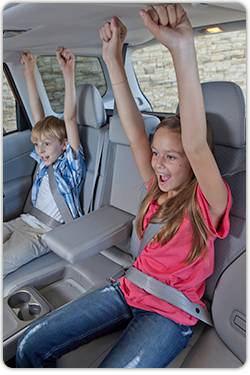 1. I Spy. “I spy with my little eye, something red.” This easy-to-learn game is perfect for preschoolers, and can keep them entertained for unbelievably long periods of time. The directions are simple: One person spies something and recites the line, ending in a clue. Everyone else takes turns trying to guess the mystery item.

2. Road Trip Bingo. This fun game combines bingo with a scavenger hunt. Give each child a flat surface, such as a clipboard or hardcover book, to put on his or her lap. Each player gets a free printable bingo card and a zip-lock bag with 16 pennies. When a player spies an item on his card, he covers the picture with a penny. Just like in regular bingo, the first player to cover all the squares in a straight line wins.

3. License Plate Game. When we were kids, everyone seemed to play the license plate game on family road trips. Armed with a pad of paper, we would write down the name of each state as we spotted it. The goal, of course, was to nab all 50 states. If we were lucky, we’d bag the Canadian provinces, too. Nowadays we love the ease of an updated free printable license plate game, where kids cross off the US states and Canadian provinces as they spy them. For older kids learning US geography, we recommend the map version, which shows how far away each car originated.

4. Tic Tac Toe. All you need are two players and a pencil to play this popular standby. Player One places an X on the grid, Player Two plots an O. They continue to take turns until one player has three across. Hand your kids several copies of our printable Tic Tac Toe template and let them do the rest.

5. I’m Going on a Picnic. This alphabet-based memory game is great for kids 5 and up. You don’t need a game board or any materials. The game can be played with as few as two players, but it’s more fun when the whole family joins in. The first player says “I’m going on a picnic and I’m bringing...” followed by something that begins with A, such as apples. The second player repeats what the first person said, but adds something that begins with B. So she might say “I’m going on a picnic and I’m bringing apples and bananas.” And so on with C, D, and the rest of the alphabet. If someone forgets an item, she is out. To be fair, feel free to be lenient and give hints to younger players. The last player to be able to recite all the items on the list wins.

6. 20 Questions. This easy-peasy game is great for younger kids, thanks to its straightforward rules. Player One thinks of a person, place or thing. Everyone else takes turns asking questions that can be answered with a simple yes or no. After each answer, the questioner gets one guess. Play continues until a player guesses correctly.

7. Connect the Dots. Why is it that all the best games are so gosh darn simple? This “make a box” game works best when each player uses a different colored pencil or crayon. You’ll find the quick set of directions on our free printable connect-the-dots game sheet.

8. Hangman. Generations of school-age kids have loved the original, low-tech version of “Wheel of Fortune.” The first player thinks of a person, place, movie or book title—it could be anything, really. Instead of writing out the saying, she leaves an underscore for each letter in each word. The second player guesses one letter at a time. If the mystery saying contains the letter, it is written in the correct place. If not, the first player draws a head on the hangman scaffold. When enough incorrect letters have been guessed, the dead body is complete and the second player loses. If the guesser solves the puzzle before the body is complete, he wins. Print out our free hangman game template, and you’re good to go.

9. The Preacher’s Cat. Here’s another alphabet-based memory game for school-age kids. The game centers around a sentence in which only two words change. To play, each player constructs the same sentence around a letter of the alphabet. Starting with A, the first player might say “The preacher’s cat is an awesome cat named Amy.” The second player replaces the two underlined words with others starting with A, such as, “The preacher’s cat is an adorable cat named Albert.” If a player can’t think of a new word, or if she repeats a word, she is out. The play continues with B, C, D, and so on, until there is one remaining player.