AmazingGoodwill.com is happy to share the unique viewpoints, talents and creations of those who support our mission and love to shop our stores! If you have an idea, project or something you'd like to share with us for a possible guest post, please email it to social@goodwillsew.com.

A Song Lost in Time: Listen to this Goodwill Amazing Find Story

When Walt Kienzle walked into his local Goodwill Store & Donation Center in Bartlett, IL, he wasn’t searching for anything in particular. As a versatile collector and a frequent Goodwill shopper, he was used to perusing the store for unique items to add to his collection. Most of his finds are vintage, so when an old shellac record album caught his eye, he didn’t think much of it – at least not at first 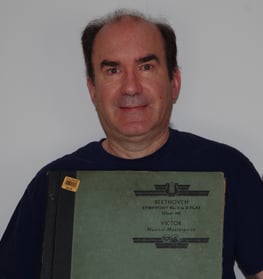 He didn’t know anything about the album – a recording of Beethoven’s Symphony No. 4 in B Flat (Opus 60), as performed by Eugene Ormandy and the Minneapolis Symphony Orchestra – but he recognized that it was incredibly well-preserved. Most shellac albums are easily damaged, but this one had clearly withstood the tests of time. Walt also noticed that markings on the album cover looked similar to those used in libraries, indicating that it had likely been part of a reputable collection in the past.

Walt is an avid music enthusiast, so whenever he adds a new album, CD, or another piece of music to his personal collection, he also archives it on Discogs.com – an online phonograph inventory and sound database – so that he can share with other music lovers. He didn’t realize at the time that sharing this particular album would lead to the discovery of a performance that was thought to have been lost to time.

A few months after Walt archived the album, he was contacted by a docent of the Minnesota Orchestra (formerly known as the Minneapolis Symphony Orchestra). Their conversation shed some light on just how serendipitous Walt’s discovery truly was.

The Minnesota Orchestra representative helped Walt fill in the gaps in the album’s history, revealing it to be a long-lost performance that 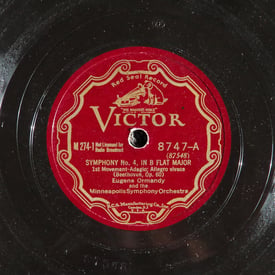 had originally been recorded in 1934 and published in 1935. While many similar recordings were republished, this particular album never was. Walt was informed that he was and is still the only person with a physical copy in their possession.

In addition to finding out that he held the only known copy of the album, Walt was also informed that the album is incredibly rare for another reason. The performance it contains was one of very few that took place in a rather short period of musical history, as Eugene Ormandy, the conductor, only worked with the Minneapolis Symphony Orchestra from 1930-1935. This symphony was likely one of the very last that he performed with them, making the album a true time capsule.

“I didn’t quite believe it at first,” Walt says, “but once I realized what it was I just felt lucky to have found it at all.”

Walt knew that something this rare simply had to be shared somehow. While the record was in fantastic condition, there aren’t many ways to easily translate the music from a 78 RPM shellac record into other mediums. Fortunately, Walt’s love of music came through for him once again.

He just so happened to own a record player from the 1970s. Although he had to spruce it up a bit with some additional equipment, he successfully used it to replicate the album in the form of a compact disc and a few other musical mediums. Walt has also shared the record online so that others can enjoy it digitally. You can download audio samples of all ten album tracks here.

When Walt first heard about Goodwill’s Amazing Finds Contest – a celebration of the unique items and treasures that are uncovered in Goodwill stores all across Southeastern Wisconsin and Chicago – he knew that his album definitely fit the description of an “amazing” discovery. He entered a photo of himself with the album and a brief description of its unbelievable history and was, not surprisingly, selected as one of the ten contest winners by online voters. While Walt looks forward to sharing the album with more music lovers in the future, he says that for now, his only real plan for it is to enjoy it – which is exactly what it was intended for.

“The response from the music community and other collectors has been wonderful,” says Walt. “I’m just so happy I could help share it.”

Goodwill loves to hear stories like Walt’s, and other such tales of the amazing discoveries shoppers like him make at Goodwill retail stores each and every day. Visit AmazingGoodwill.com to learn more about upcoming contests, to view the official contest rules, or to locate a store near you so you can see what amazing discoveries you can make for yourself. 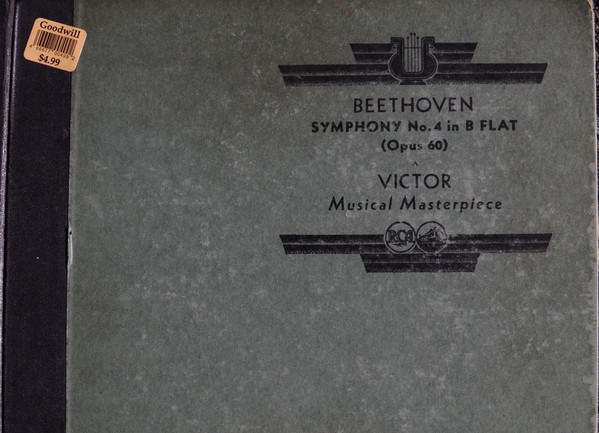