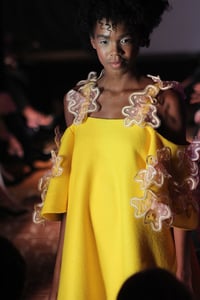 Milwaukee designer Miranda Levy, who appeared on Season 12 of Project Runway, also showcased her designs in the show.

In addition to this runway event, Project ReUNITED will also feature pop-up shops from Boston Store and the designers themselves.

Inspiration from photos of fashion shows like this are a great way to get ideas on what’s current, and what you can do to emulate looks with items found at Goodwill!