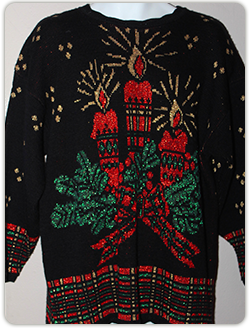 Peace on earth, goodwill toward men, and of course …Christmas sweaters? While most of the free world celebrates the holidays in a lot of traditional ways, there are those trailblazers who, for whatever reason, have veered a little off the yuletide course. What do I mean by this? Have you noticed all the crazy Christmas sweater parties going on across the globe?  When did this phenomenon start?  Who had the first party? Well, I thought I might just sit down and see if I could find some answers on the World Wide Web, and then add my own two cents. According to an article I found on TIME magazine’s website from December of  2011, the eye-popping patterns and colors emblematic of the knit 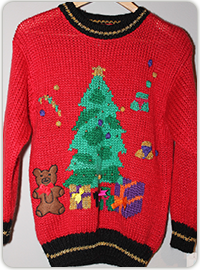 party starters most likely stemmed from the poor taste in fashion that was evident during the 1980s. I do seem to remember a lot of stores began selling these novelty sweaters when the popularity of shows like “Dynasty,” and of course the iconic wardrobe of “The Cosby Show” could make almost anything fly off the shelves in a hurry! That popularity was fickle, however, and seemed to fade as the 90s ushered in a 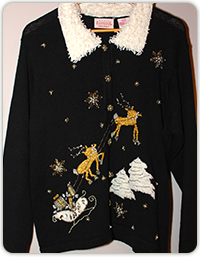 more austere look that eschewed the bold tones in favor of a monochromatic black, and the grunge aesthetic. Then, around 15 years ago, with the rise of a little thing called the internet, articles began to feature ironic swipes at the “beauty” of these garments. This must have given birth to the idea that the ungainly could be celebrated with some amount of merriment. From there a cottage industry of sorts was spawned for those who began trolling thrift stores across the country in search of the most outrageous examples of holiday overkill in existence. All you have to do is search Ebay or Amazon for Christmas sweaters and you’ll soon see that even the homeliest knitwear featuring iconic holiday themes, like candy canes, Santa Claus, Christmas trees, presents, wreaths (and the list goes on and on) can fetch a pretty penny for the seller! 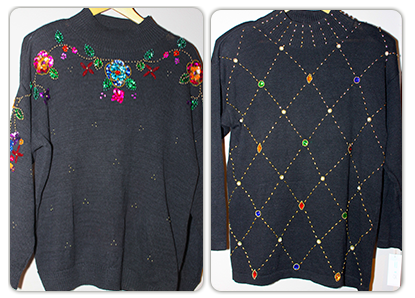 I, for one, happen to love the idea of attending an “over-the-top” crazy Christmas sweater party. When folks started having these, it basically gave us a license to exercise what would otherwise be described as bad taste. In a world where we’re taught “less is more” the sweater parties (that seemed to have started on the West Coast in the late 1990s, according to various sources I found) promoted “excess is best” instead!  As a stylist and vintage clothing seller, the excellent idea was one that I could totally get behind!  Who doesn’t want to dress up, as well as, act up a little bit? For those adults who just can’t muster the energy to do a Halloween costume, they certainly have no problem donning a blinged-out Christmas sweater! The appeal of wearing something that could be construed as horrible suddenly makes it all the more fun and even, might I say, fashionably off-the-charts festive!

I particularly like the statement or “trophy” sweaters of the 1980s that featured lots of beads and sequins in non-Christmas patterns. These beauties certainly qualify to hold their own against the more traditionally bedecked knitwear. I took pictures of a few examples that I loved and they illustrate this blog! If you’re looking for your own “crazy” Christmas sweater, you might want to start at Goodwill. You never know what will tickle your fancy, or your funny bone, but rest assured that when you don your appalling apparel purchased from us, you just helped someone else get job training. Now that’s not so crazy is it?