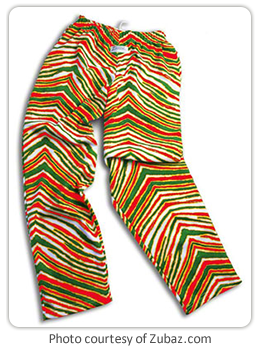 As Heidi Klum famously says in every episode of Project Runway as she introduces the designer contestants … “In fashion, one day you’re in and the next day you’re out.” That sentiment rings true in relation to some of the worst trends ever to invade our homes and infest our closets. Sometimes we’re exposed to trends by viewing them on television and by seeing them as we pass people on the street. At times we can shrug it off as bad taste, but other times we embrace these momentary lapses in fashion judgment and struggle to make them our own. This time of year is ideal to discuss and reflect on items we once wore (and possibly regretted later) because it’s often a bitter pill to swallow when we realize people are wearing our cast-off fashions as Halloween costumes! But, let’s face it, there have been some scary things touted as stylish trends over the years. Some of these trends people might still be clinging to, and in doing so, they might literally be frightening those who gaze upon their “frozen-in-time” style aspirations. So, let’s take a look at just a few of these so-called fashion trends, and then cleanse our mind of the horror immediately after…

Zubaz pants (shown above) were a trend that started when someone decided (for some reason) that it would be cool to combine eye-popping fabrics with Velcro side closures.  These oversized-draped pants became quite the look for all trendy self-respecting meatheads at the gym, and were even adopted by middle-aged guys in the burbs to wear while doing yard work or worse yet, to run errands in.  Rapper MC Hammer famously took them to another level in his videos where the genie-in-a-bottle look made his dance moves seem cool. Well, just like “Ripley’s Believe It Or Not,” they now have their own Facebook page; and you can still find them online at zubaz.com. Following in their footsteps would be the pajama bottom trend, and the insidiously awful pajama jeans. Now that is absolutely terrifying, isn’t it? 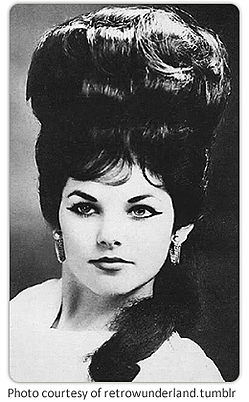 Bouffant hairstyles were all the rage for a period of time in the early 1960s and on through the 1970s. Women everywhere wanted their hair to defy gravity and lift off from their heads like an atomic bomb for some reason. Sleeping while sporting one of these styles was difficult, to say the least, and the resulting insomnia created a certain type of “Walking Dead” look that many of those whose hair reached to heavens hilariously achieve. Thankfully this trend has been tamed a bit from the extreme volume it once required, but every so often you might see it - just like a ghost that rears its scary head when you least expect it just to scare you all over again! For more frightening photos of this terrifying trend, check out retrowunderland.tumblr.com. 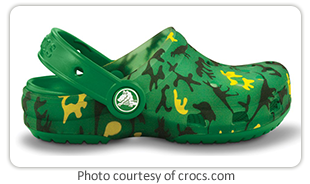 Crocs and their knock offs are still prevalent on the fashion scene, but what makes these foam-rubber atrocities truly horrific is that people actually wear them intentionally! There is nothing scarier than a full-grown man, like the famous chef Mario Batali, sporting bright-orange Crocs as he navigates the restaurants he owns or as he makes television appearances. File this hideous offense to the senses under the same rock that brought us bedroom slippers as footgear! I just get chills whenever I see this! For more awful styles go to www.crocs.com.

Enormous shoulder pads are yet another thing we have to thank the 1980s-era for. Now, I’m not against any shoulder pads at all, just the ones that made your mom look like a linebacker. Not only were they unflattering, but they took up a lot of room in your closet! Supposedly the t-shaped look was a flattering one, but I would have to disagree. For more on this blast-from-the-past, check out these boards dedicated to shoulder padded glory at pinterest.com. 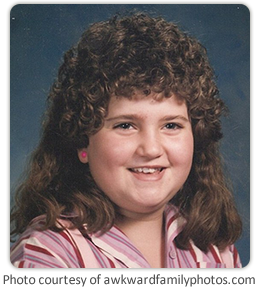 Last, but not least, we have the infamous mullet hairstyle. Now, there are multiple iterations of this short-on-the-sides, long-in-the-back debacle to choose from.  You could get your mullet permed, you could crimp it, or you could just let if fly with a life of its own. Sometimes it was even accompanied by the “mall bang” in the front that defied gravity, and other times it was spiked up like there was no end to the hairspray and gel supply! But, one thing it never ceased to be was absolutely creepy. Speaking of creepy, check out the carefully-curated images at awkwardfamilyphotos.com. 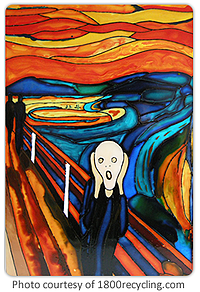 Well, I could go on, but I think I’ve touched on a few of the truly scary trends that were, and in some cases, are still considered fashion. It’s all in fun, of course, but in the end fashion is always about what makes us feel special, confident and happy. That’s why Goodwill is a great resource to help change up your style, or search for items that can bring your fashion sense back to life, just like Frankenstein did with his monster! With your purchases of Halloween attire, and your donations of gently-used clothing and household items, you’ll help make the world a little less scary and frightening for those in need. And that, my friend, is something to scream about!