One of my husband Dan’s earliest memories was when he was six years old. He saw an Army Ranger in uniform and thought, that’s what a superhero looks like. That memory eventually inspired his own service in the Army. 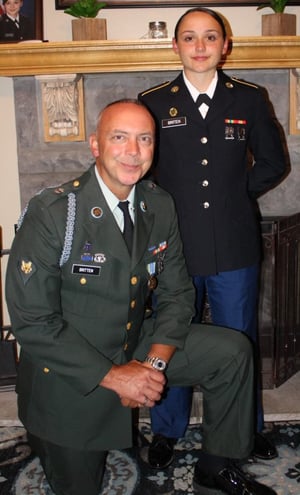 to-hand combat. During his terms, he circled the globe with stints in Germany, Iraq and Afghanistan. While overseas, he felt good knowing he was protecting the country he loves and the freedom we all enjoy.

While serving, Dan developed endurance and learned how important it is to not give up – even when things get really bad. On the frontlines, he was in survival mode and was often isolated. This was before the days of good internet connections and Wi-Fi so he had limited contact with his family and friends back home. But that was one of the factors in his team developing a close camaraderie with each other. They became his second family.

Dan felt a sense of loss when it was time to come home because he was leaving behind his Army family. As a soldier, one of the greatest memories is the inseparable brotherhood while you’re there, and one thing a soldier always remembers is the ones who were lost along the way.

His transition back to civilian life was challenging. Although going back to work wasn’t an issue, it was a lot different being able to do things on his own schedule. For example, eating and sleeping or even things like running to the store or gas station whenever he wanted. But the support from his family and friends helped him get back into the swing of things.

Serving our country is a family tradition. We are a family of service and we raised our children to be service-minded. Our daughter, Alexis, just graduated from boot camp and we hope that our sons, Hunter and Jackson, will also decide to serve when they are old enough.

Being in the military is an invaluable experience that shapes the rest of your life. The sacrifice isn’t just while you’re deployed – it continues once you get home. Memorial Day and Veterans Day can be difficult because it’s a time to remember those who were lost. My husband is one of the lucky ones. Although there are tough days, he is grateful for the experiences he had and the opportunity to serve our country.

Goodwill thanks the Britten family and other veterans for their service. If you served our country and are looking for employment, we have your next mission! To apply, view our current job openings.