I was born in Milwaukee, Wisconsin in 1959. While growing up, I spent some time in Detroit, Michigan but moved back to Milwaukee to finish up high school.

I graduated high school early and went straight into the U.S. Army. I decided to serve because all of the male figures in my life served 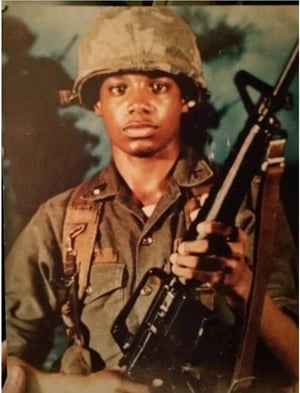 in the military – my grandfather, father and also my older half-brother.

I started basic training at Fort Knox in Kentucky and was later shipped to Fort Benning in Georgia for advanced infantry training. I also went through Ranger school followed by paratrooper training. Most of the training I did was outdoors. We walked everywhere, no matter how far and in full gear. We also spent a lot of time at the range to stay sharp with our weapons.

I served for three years plus an additional three years of inactive duty with the National Guard. During my service, I traveled the world. I went to Panama for jungle training and Alaska for winter survival training. I also spent time in Germany and Korea. During my time off, I traveled around Europe. I loved seeing all of these places. One of the things I remember most is noticing how much we have in our country compared with other countries. It made me grateful for everything I have in life.

The closest I came to seeing combat was when we had to pack up and get on a plane to help one of our allies with unrest in the streets. That’s when it really struck me that what I was doing was real. Even though we ended up not leaving the tarmac, I was nervous thinking about going into combat. Both my father and brother were in combat during their service, so I also wanted to experience it. But it wasn’t meant to be during the time I served.

I stopped serving because I was ready to get into the workforce and also wanted to be closer to home for my son who was born while I was in inactive duty. It was an adjustment transitioning to civilian life. I still woke up at 4am and had the mentality that I had to keep active all the time. I found a job working for a company that primed and painted frames for cars.

In time, I began working for Goodwill. I completed their laundry service training program for veterans and was hired in 2009. I’ve been with them ever since. I worked my way up and am now working as a driver that picks up documents that need to be shredded. Every day is different and I get to meet a lot of people without being stuck in one building.

Serving in the Army is what made me into a man. I learned how to communicate with others and work as part of a team. I loved every minute of serving and carry the important skills I learned with me throughout life.

Goodwill thanks George and other veterans for their service. If you served our country and are looking for employment, we have your next mission! To apply, view our current job openings.