Eddie completed Goodwill’s former Work Services program in 2016 and recently completed our former Explore WORK service in June of 2019. While Eddie completed these services, he showed his desire to work and his skills.As Goodwill’s Supported Employment began working with Eddie, there was an opportunity to do a Temporary Work Experience 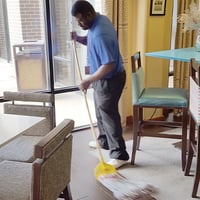 (TWE) at the Hampton Inn with the potential for hire. Eddie started his TWE there in October of 2019. Eddie was looking for work similar to what he did at his previous job, which was utility cleaning. From his first day at Hampton Inn, Eddie liked his cleaning assignments. During his TWE, he was responsible for cleaning throughout the hotel. His tasks included cleaning the bathrooms, fitness room, the pool, the lobby of the hotel, changing garbage receptacles, and sweeping and mopping floors by the elevators. Eddie also would vacuum all four floors of the hotel.

During Eddie’s TWE, management changes were occurring at the hotel. That didn’t faze Eddie, as he just kept on working and following his task list each day that he was scheduled to work. Despite all the changes, Eddie continued to work well with his co-workers and he impressed the new management!

As Eddie neared the end of his Temporary Work Experience, he wondered about being hired. Job Developer Aleka met with the new management to discuss the potential for Eddie to be hired. After these meetings, they decided that Eddie would stay on and become an employee! Eddie was excited that he was hired and got to keep working in something he is familiar with and likes to do. He’s been employed at the Hampton Inn since November and continues to do a great job cleaning the hotel, making it nice for guests and fellow employees. He likes making money, too! All of Eddie’s co-workers are glad to have him working there.