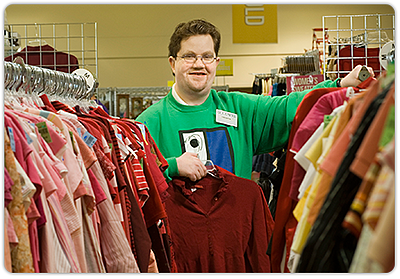 There are many hallmarks to becoming a young adult - a first job, first car and first apartment - and the independence and pride that achieving these milestones gives to the person who has conquered them. For Creighton, Goodwill has been the catalyst to making those dreams a reality.

Creighton’s Mom, Toni Quinto, recalls Creighton having medical issues from the time he was a small child. While there is no official name for the issues he has, “his body is just put together differently,” she says. He has had several serious medical problems throughout his life that have required hospitalization and surgery. But through all of that difficulty he has always had a goal – to be independent.

The first big step for Creighton toward that independence was to get a job. He knew where he wanted to work right away, and he applied to the Delavan Goodwill Store & Donation Center. Creighton recalls the day they received the phone call that Creighton got the job. “I was so happy!  It was the best day!”

Amazing things happened when Creighton began working. In nearly a year of employment at Goodwill, he made significant improvements in his physical and emotional health. At a recent visit, the doctor told him that he was in the best health of his life. The confidence that his job at Goodwill has given him has allowed him to move out of the assisted living program he was a part of, and into his own apartment.

Creighton’s Mom echoes the doctor’s findings. “His job has made him smarter and more responsible. When our family is together, he has work stories to share and contributes to the conversation in ways he was never able to do before. Creighton was able to take our whole family out for dinner, and I cannot tell you how proud he was. For many people, a job is something that pays the bills, but for Creighton, his job has meant independence.”

Creighton is proud of the goals he has accomplished so far, and has his sights set on achieving even more. “I wanted to get a job and have my own apartment, and I did it.  Now I want to learn to drive, and someday I am going to buy my own car.” When asked how he feels about Goodwill, he smiles and says “Goodwill gave me a job, and my job gives me a great life.”