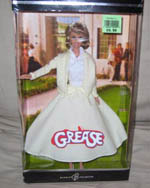 Her step-daughter is crazy about two things: Harry Potter and the movie Grease. Janet was looking for items related to these two movies for her step-daughter's birthday and she found it VERY hard to find anything! She was so excited when she discovered this Barbie Doll depicting Sandy from Grease. It was still NEW, in its box and it was only $9.99. Janet says she had to fend off a few other shoppers while she waited for the sales associate to open the case, but it was worth it. Her step-daughter just loves it!